Depression and Addiction: We Must Break The Stigmas

It's 2014, but people suffering from mental illness often times don't want to ask for professional help because they fear being labeled as "crazy" or a "wack job."

Depression runs in my family.

My son was diagnosed with severe depression and anxiety disorder at the age of 15.

He had been a pretty happy, "normal" kid growing up, but he slipped into an inexplicable emotional funk in his early high school years. He was sad, withdrawn, and struggled with everyday life. It was heartbreaking to watch. It got to the point where he couldn't even get out of bed to go to school.

My wife and I got our son into therapy and he was prescribed an anti-depressant. Unfortunately, the first anti-depressant someone tries isn't always the right anti-depressant; it can take some trial and error to find an effective medication. That was the case with our son, and during the search for the right medication things got pretty dicey.

This was the start of a roller coaster ride of depression and addiction for our son and our family. We didn't know it back then, but the next several years of our lives would be a living hell and the ultimate test for my wife and I as parents.

According to the Substance Abuse and Mental Health Services Administration (SAMHSA), "Mental and substance use conditions often co-occur. In other words, individuals with substance use conditions often have a mental health condition at the same time and vice versa." SAMHSA goes on to say, "Approximately 8.9 million adults have co-occurring disorders; that is they have both a mental and substance use disorder" and "Only 7.4 percent of individuals receive treatment for both conditions with 55.8 percent receiving no treatment at all."

Those numbers are staggering. And the numbers that boggle my mind the most are the ones about people suffering from co-occurring disorders (a mental disorder and a substance use problem):

Only 7.4 percent of individuals receive treatment for both conditions with 55.8 percent receiving no treatment at all.

That, to me, is inexcusable.

That was the case with my son. His depression and anxiety were eating him alive, so he turned to marijuana, prescription drugs that weren't his, and, eventually, heroin. But his goal wasn't to become an addict. He just wanted to escape his negative feelings and try to feel normal. In fact, I can remember my wife and I holding our son in our arms while he cried and said to us, "Why can't I just feel normal?"

In my mind, the reason so many people don't get the treatment they need is simple: mental illness and addiction are still shrouded in stigma. It's 2014, but people suffering from mental illness often times don't want to ask for professional help because they fear being labeled as "crazy" or a "wack job." They keep their negative feelings bottled up inside and struggle through life on a daily basis, never knowing the happiness or normalcy they are capable of experiencing. Not only do they not talk to a professional about their issues, they don't even discuss their problems with their loved ones. They are embarrassed and ashamed, and resist taking that first step: seeking treatment.

Addiction is the same way. According to Heroes in Recovery, "While 23 million people each year need help for addiction, only 3 million actually seek treatment." The stigma associated with addiction is overwhelming for millions of Americans. So again, people keep suffering through their day-to-day lives because they're afraid or ashamed to reach out for help. Trust me: nobody really wants to be an addict. Given the choice of affordable, effective treatment and recovery, or continuing their lives addicted to drugs, which do you think substance abusers would choose?

Depression runs in my family. And I have it, too.

I struggled with it for years, primarily after my son's diagnosis and the start of his addiction issues. I felt sad, alone, and worthless. It was horrible. But I finally sought therapy, found the right anti-depressant (after trying a few that didn't work), and started to feel better again. Much better.

Today I still feel better. So does my son, who found happiness through therapy and the right (legal) medication and is coming up on two years of sobriety. Our day-to-day lives are no longer filled with negativity and hopelessness. Sure, we have bad days once in a while, but that's just life; and we deal with it.

The difference now is that a bad day doesn't last months or years.

P.S. One of the organizations that helped me understand my depression early on is the Depression and Bipolar Support Alliance. They are a tremendous resource. One day several years ago I bought a bracelet from them. It's a green fabric cord with a little rectangular metal "charm" on it. The four sides of the charm each say something different: embrace, positivity, possibility, and + + + + + +. I put that bracelet on when it came in the mail and I haven't taken it off since. Not even once. Every time I look at it, I'm reminded that life can be a positive experience. You just have to embrace its possibilities. 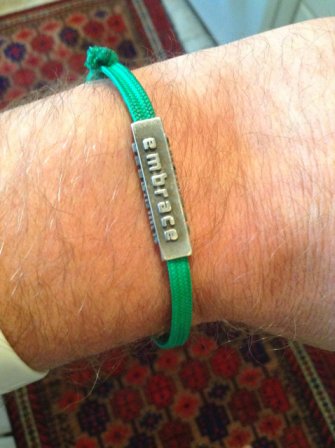 Dean Dauphinais works tirelessly to break the stigma associated with addiction. He is the author of the blog "My Life As 3D: 3D-mensional Musings from the Father of a Person in Long-Term Recovery from Addiction," a member of the Parent Support Network at the Partnership for Drug-Free Kids, and a Lead Advocate for Heroes in Recovery. You can follow him on Twitter.

(NOTE—This is one of the new voices The Fix has commissioned for our new blog section. And if you'd care to add your voice to the mix, check our brief and simple requirements.)

Dean Dauphinais works tirelessly to break the stigma associated with addiction. He is the author of the blog My Life as 3D: 3D-mensional musings from the Father of a Person in Long-Term Recovery from Addiction, a member of the Parent Support Network at thePartnership for Drug-Free Kids, and a Lead Advocate for Heroes in Recovery. You can follow him on Twitter.

The Least Secretive Life
I felt grateful that my therapist had given me a complete apology....

The Top 10 Drug Policy Stories of 2020
While drug use increased in 2020 due to pandemic-related layoffs,...

In Memoriam: Bob Kaplan
Bob taught me that when someone reaches out for help, it doesn’t...

How Death Acceptance Can Help Relieve Your Anxiety
Accepting that death is part of the normal cycle of life can help...

What’s Existential Anxiety?
The pandemic has many people feeling helpless and questioning the...

5 Recovery Resolutions to Make for 2021
2020 was a challenging year for people in recovery — and everyone...

The Five Pillars of Recovery from Trauma and Addiction
Believe in yourself. Tell yourself that you deserve happiness, joy...

How to Quit Drinking: The Princess Is in Another Castle
When I asked people how they did it, I think a small part of me...
Video: What Is Suboxone?
Questions about Suboxone are some of the most frequent search terms that bring people to The Fix....