Should Prescribing Doctors Be Held Responsible When Their Patients OD and Die?

Rehab admissions have increased, emergency room visits are up and overdose deaths from prescription medication have multiplied dramatically as a result of unregulated prescribing practices.

On June 25, 2009, fans around the globe mourned the death of Michael Jackson. Like too many before and since, Jackson, only 50 at the time, met his demise at the hands of a prescription medication addiction that no doubt had ruled his life for the final days, years and maybe even decades before his death.

The autopsy conducted on Jackson’s body concluded that the cause of the star’s death was a fatal injection of propofol. Sold under the brand name Diprivan, propofol is a powerful sedative that slows heart and nervous system activity and is most often used to relax patients before, or during, general anesthesia for medical procedures and surgery. The post-mortem also included details that he had ingested a number of other pills, including a reported eight lorazepam, on the night he overdosed.

What followed in the wake of Jackson’s untimely passing was a peculiar series of events that saw his personal physician Conrad Murray charged with, tried for, and convicted of involuntary manslaughter in the singer’s death. The bizarre trial revealed that Murray stayed with Jackson six nights a week, and that he was at times begged to administer drugs to help his insomniac patient sleep. While the doctor's defense team argued that Jackson had injected himself with the lethal shot of propofol, the jury found Murray guilty and he served two years in prison before being released in late 2013.

Once a renowned physician with a promising career, Murray had his medical license revoked in Texas and suspended in California and Nevada. Though he is now practicing medicine again, the incident irreparably tarnished his reputation in the U.S. He is currently working with local heart surgeons in his new role at the Trinidad Ministry of Health.

Murray’s anti-climactic exodus marked an end to the bizarre story of the murder of pop music’s prodigal son. Still, regardless of the here and now, the strange case of Dr. Murray had the effect of setting a precedent for criminally trying physicians in cases where their patients die of drug overdoses from prescribed medications. 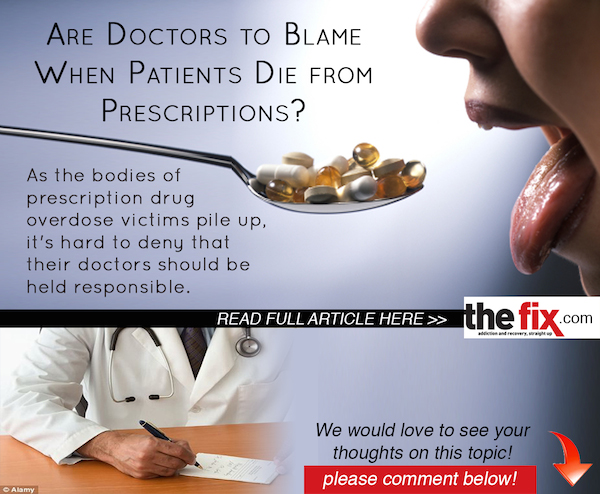 More recently, the fallout from another celebrity death caused a stir when former Slipknot bassist Paul Gray was lost to a vile combination of morphine and fentanyl. The notorious rocker’s doctor, Daniel Baldi, was subsequently charged with seven counts of involuntary manslaughter, one count that stemmed from Gray’s 2010 overdose.

Baldi had already faced four medical malpractice claims and three suits for wrongful death prior to being tried for involuntarily killing seven other patients. The doctor, who ran a pain clinic in Des Moines, Iowa, was accused of audaciously writing scripts for Gray and others, and faced up to 16 years in prison if convicted of the crimes.

According to court documents, Baldi "did unintentionally cause the death of Paul Gray by the commission of an act likely to cause death or serious injury, to-wit, continually wrote high-dose prescription narcotics to a known drug addict.” Gray’s wife Brenna agreed with those findings. She testified that Baldi prescribed Xanax to Gray, knowing that her husband was gripped by an addiction to the anti-anxiety medication.

Despite calls for justice by Gray’s widow and the friends and family members of other departed patients, Baldi was cleared of all charges. On May 1, jurors determined the doctor was not guilty of any of the seven counts of involuntary manslaughter leveled at him. Unlike Murray, Baldi would not be held responsible and jailed for the overdose of the people he had prescribed drugs to.

Of course, celebrity overdoses and the trials of their doctors are but a drop in the bucket of the issue at large. A Google search with the keywords “doctor overdose deaths” turns up nearly 34 million hits. The headlines are as varied - “Tulsa physician has most patient overdose deaths,” “NYC doctor on trial in patients’ overdose deaths,” “Long Island Dr. Feel-Good charged in Oxycodone overdose deaths...” - as the stories are tragic.

Prescription drugs contribute to over 22,000 fatalities a year in the US alone. The number is indicative of an epidemic that, unlike heroin in the 1970s or crack in the 1980s, is being perpetuated by educated white coats, not by drug pushers and street chemists. That revelation, it seems, is puzzling the judicial system, lawyers on both sides of the bench, police officers, researchers and doctors who, increasingly, find themselves at the center of lawsuits and criminal court cases.

Remi L. Roy, founder of Martyr Magazine, last wrote about holding doctors responsible for prescription drug deaths and the global epidemic of synthetic drugs. You can find Remi on Linkedin.

Ben Affleck Needs No Research for Uncle Charlie in "The Tender Bar"
Affleck grew up with an alcoholic father. Maybe that connection is...

What I Wish My Parents Had Asked Me
I am writing you this letter as an anorexic, bulimic, compulsive...

How Long Should a Recovering Alcoholic Wait Before Dating?
Getting back into the dating game can test your recovery, but it’s...

Dry January: Should You Do It?
Giving up alcohol, even for a month, can have far-reaching and...

Connection Can Strengthen Your Recovery
Whether they’re with family or friends, relationships can help you...

Ask an Expert: How Can I Maintain My Sex Drive While On Antidepressants?
I have been on zoloft for several years and it has really helped me with my depression. Before I...