Self Growth; How to Anchor Yourself and Rebuild your Personality From the Ground Up

How does someone trapped in hell, drowning in the flames and living in suffering - finally start climbing out? Whether you are an addict, living with trauma, depressed, lost, or simply refusing to accept that you are "just the way you are" there is always room to find something to ground yourself and grow from that same ground, up.

This positive personality trait, or character strength can't be something that changes day to day depending on the situation and your attitude. If you consider yourself intelligent, go back and trace your steps and find out if you've had any serious moments of self doubt of your intellectual capabilities. If you've ever thought "man, I'm stupid" instead of "that was stupid"(followed by improvement) then this is not something you can choose. Whether you are empathetic, creative, intuitive, passionate, determined, or resilient by nature, find one that defines you.

Be cautious with what you choose, if you choose to stand on something that, when push comes to shove and when the rubber meets the road proves to be too shaky, your entire sense of self will collapse. For example, if an MMA fighter defines his or herself on their perfect record, and approaches every challenger with false arrogance, if they lose their entire identity is lost as well.

The purpose of choosing something singular and building on top of it is so that in the event you have to change some part of yourself; letting go of one trait for another, eliminating a bad habit, or learning from failure - no matter what happens you still have an identity. Crippling yourself because of an unsubstaintiated grandiosity or narcissism will always catch up to you in the end, and when it does, your whole personality is now called into question.

Don't let your actions on drugs influence your decision. For example, if you are typically an empathetic, caring, or honest person - don't let the fact you stole, lied, or cheated to get what you needed while you were struggling. What counts is how you feel about it now, if those things are a source of shame - it shows that those values mean something to you.

My personal trait for example is grit:

"Grit in psychology is a positive, non-cognitive trait based on an individual's perseverance of effort combined with the passion for a particular long-term goal or end state (a powerful motivation to achieve an objective). This perseverance of effort promotes the overcoming of obstacles or challenges that lie on the path to accomplishment and serves as a driving force in achievement realization. Distinct but commonly associated concepts within the field of psychology include "perseverance", "hardiness", "resilience", "ambition", "need for achievement" and "conscientiousness'"

No matter what happened through addiction and in recovery, I've always had the drive to move forward. This showed itself in addiction by my lack of fear in the face of odds, and my determination to get what I wanted. In recovery this showed in my work ethic, and my refusal to get caught up in the mundane or superficial and to remain goal oriented. This is something that defines me as a person. Now, not everyone has this same level of grit, and not everyone necessarily needs to. This is my bedrock, not anyone else's.

After a certain point, no matter how much grit I had, eventually I had to admit that I could no longer get sober on my own, for someone like me - this was no small feat. After giving up and deciding that I could no longer control myself, going to rehab and surrendering to the will of someone else to fix me - it ended up being up to me in the end anyway. Regardless, I had found some positive in the sea of negatives about me to hold on to. Doubting my intelligence, doubting my empathy, doubting my dedication was all just noise but at the end of the day, I knew one thing. I was strong. I was strong for having made it here in the first place. 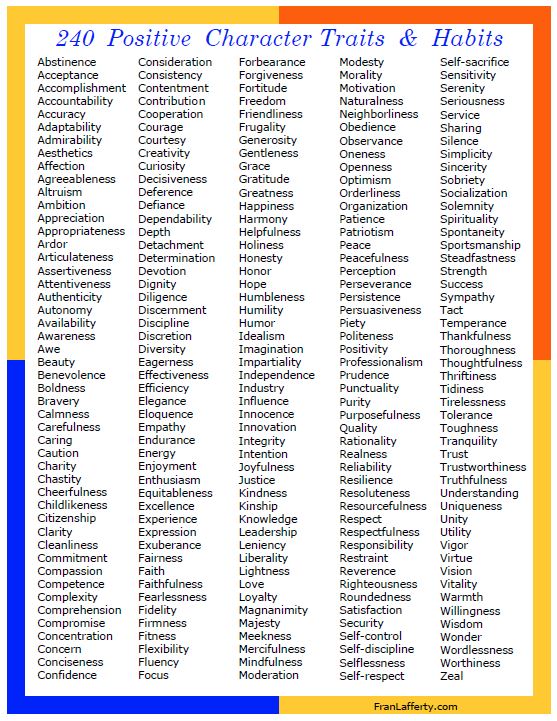 Now, this is a big list, I know. It may be hard to pick just one but do some careful and serious consideration. Your trait may not be here, but ask your family and close (real) friends what they think.

So, you've picked your trait. Now what.

Hold on to that trait for dear life, and I mean literally. That's how serious losing sight of who you are is. Fall back on it, use it as a crutch, and when you are unsure of what to do - use it.

But don't stop there, it will feel safe and when safety is something you need, fall back on it but this is only meant be the foundation to build yourself back up. Slowly but surely you will begin to realize other positive aspects of yourself. Now that you have something holding you up it gets harder to spiral into depression when the thing that makes you-you is solid. Build around it slowly and listen to what people say, even if they don't like you because they may tell you things about yourself that you refuse to accept. Remain humble, and live true to yourself and people will see that and begin to compliment you and let you know about parts of yourself that you had never considered before.

What you choose to do from here is up to you personally, once you have something to stand on you can finally learn to walk again. It will be clumsy at first, walking on new legs always is.

Take it slow, don't be too hasty, and slowly use your effect on the people around you to define yourself and build your confidence.

It goes without saying that honesty is key here; if you distort your image or present a sort of false bravado to those around you they will sense it and most people will walk away. The difference being that bravado is knowing that they will like you because of how you act, and real confidence is not caring if they do or not. People can sense this, and tell the difference if they have it themselves.

Re-write your story. I did, and you can too. Your story doesn't have to be like mine but just close this chapter and start a new one.

I'm a 24 year old university student from Montreal, Canada. After finally wrestling my life from the clutches of a decade of drug addiction I've been able to put one foot in front of the other and keep using the same fight that didn't let anything get in my way during addiction, and applied it to life. I'm 15 months sober from heroin and 5 months from all othe substances.

****************
Join the conversation, become a Fix blogger. Share your experience, strength, and hope, or sound off on the issues affecting the addiction/recovery community. Create your account and start writing: https://www.thefix.com/add-community-content.

Ben Affleck Needs No Research for Uncle Charlie in "The Tender Bar"
Affleck grew up with an alcoholic father. Maybe that connection is...

What I Wish My Parents Had Asked Me
I am writing you this letter as an anorexic, bulimic, compulsive...

How Long Should a Recovering Alcoholic Wait Before Dating?
Getting back into the dating game can test your recovery, but it’s...

Dry January: Should You Do It?
Giving up alcohol, even for a month, can have far-reaching and...

Connection Can Strengthen Your Recovery
Whether they’re with family or friends, relationships can help you...