The Apt Portrayal of Addiction in Bojack Horseman

If you’re a fan of Bojack Horseman, you already know a few things about its titular character. Namely, that he is a compulsively self-destructive narcissist. Also, that he has issues with substance misuse. 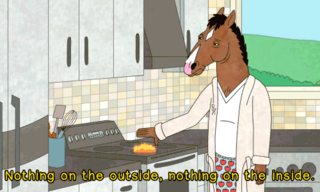 Bojack is an addict in many senses of the word as well as being mentally ill. He is a binge eater, drinker, and drug user, who indulges in said vices in order to escape his depression and anxiety. This dual diagnosis disorder, which he allows to go untreated – choosing instead to deny and self-medicate – is a large part of why the character appears as dysfunctional as he does. His attempts to suppress his emotional pain and sense of isolation only leave him hurting and more isolated as he pushes away those who try to help him. There are moments throughout the series in which viewers catch a sliver of hope that perhaps he might be having a moment of clarity, but by and large, these hopes are dashed as he launches himself into yet another pit of despair and self-destruction, almost always in congruence with an alcohol and drug-fueled bender. 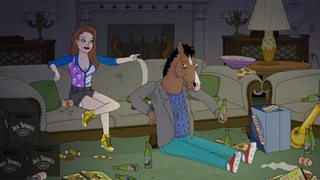 Throughout the series, viewers are given a glimpse at the various ways in which drinking and drug culture are both glamorized and normalized in the setting of Hollywood. In one particular episode, Bojack finds out that a type of heroin has been branded with his name. In a later episode, his former child co-star Sarah Lynn (now an adult) goes on a drug and alcohol binge with Bojack during which he continually blacks out, at one point even stopping at an AA meeting so that Sarah can collect her 9-month chip, despite maintaining her sobriety. The episode ends in tragedy when Sarah Lynn, having snorted the “Bojack” branded heroin, dies of an overdose. This is proof to the viewers that addiction does not discriminate and it does kill. Though Sarah Lynn has innumerable amounts of disposable income and leads the classic Hollywood “party girl” lifestyle, she still ends up meeting her end at the hands of the disease of addiction. 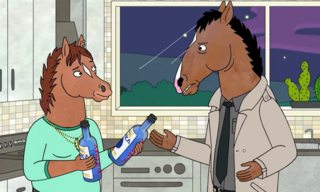 In season 5, the most recent of the series, we see Bojack attempting to moderate his alcohol use by marking bottles of vodka to only allow himself portioned amounts each day. This attempt at justifying his habitual drinking coupled with the denial that he has a legitimate problem with alcoholism is a classic sign of an individual who is addicted. Further, in a later episode, Bojack’s opioid pain pills are accidentally thrown out and he embarks on a dangerous quest (with his younger stepsister in tow) in order to retrieve more, all the while complaining about his pained back which, we later find out, is not actually injured. The fact that he is willing to risk not only his safety but that of his family is an accurate and saddening portrayal of the lengths to which individuals living in active addiction will go in order to obtain their proverbial “fix”. Finally, at the end of the episode, we see Bojack driving his car, still searching for any remnants of pills that he may have forgotten about in his glove compartment or elsewhere. As he sits at a red light he begins to grow more and more anxious, showing obvious signs of an individual entering a state of withdrawal. Finally, out of desperation, he runs his car through the red light and straight into traffic.

From this point, Bojack’s addiction spirals far beyond his control and he begins to enter a state of what appears to be psychosis as he becomes increasingly paranoid and loses his grip on reality, confusing scenes from his television show with his real life and vice versa. In the final episode of the season, after causing havoc on set by strangling his costar in a drug-fueled fury, Bojack realizes that he must confront his problems head-on. With the help of his good friend Diane, he checks himself into a rehabilitation facility. Though Diane reminds him that going to rehab will not be a quick fix for all of his problems, it is the first step towards recovery. 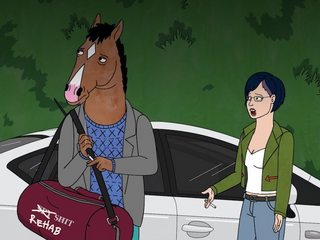 The character of Bojack Horseman is a deeply flawed individual who has experienced a lot of trauma in his life – notably his abusive and neglectful upbringing – and who has not yet ventured to deal with this pain. He is not unlike any other individual living with addiction who has not yet found themselves ready to embark on a journey of recovery. The first step to recovery is admitting that one has a problem. It is impossible to succeed in or even begin the process of recovery without doing so.

By nature of the show being animated, it might seem on the surface to be comedic and therefore unsubstantial; however, upon further viewing, it is clear to see that the show is, in fact, a deeply sophisticated commentary on life, addiction, mental illness, sexuality, and more. By utilizing the medium of an animated series, the show’s creators have found a way to soften the blow – somewhat – of delivering powerful social commentary. The portrayal of addiction and mental illness in the series is probably one of the most accurate currently on television. Though many of the characters are presented as human/animal hybrids, stripping away the outward layers of appearance, viewers will find much depth and insight into the minds of those who live with addiction and mental illness. Shows like Bojack Horseman are incredibly important, socially speaking because they boldly confront controversial topics such as the disease of addiction in order to destigmatize the mere act of discussion and to foster frank and open dialogue.

****************
Join the conversation, become a Fix blogger. Share your experience, strength, and hope, or sound off on the issues affecting the addiction/recovery community. Create your account and start writing: https://www.thefix.com/add-community-content.

Sponsored DISCLAIMER: This is a paid advertisement for California Behavioral Health, LLC, a CA licensed substance abuse treatment provider and not a service provided by The Fix. Calls to this number are answered by CBH, free and without obligation to the consumer. No one who answers the call receives a fee based upon the consumer’s choice to enter treatment. For additional info on other treatment providers and options visit www.samhsa.gov.

Recovery Through Music Therapy: An Interview with Tim Ringgold
"People tend to trust the music they love because their music doesn...

Anxious about going out into the world? You’re not alone, but there’s help
Even though people are ready to venture out and socialize, many are...

Addiction and Estrangement
Remarkably, a tense relationship with a sister or brother in...

A Pandemic of Grief
As roughly 5 million Americans process the loss of loved ones to...

Should Happiness Be the Goal? Not Necessarily
Happiness feels nice, but feeling fulfilled could lead to longer-...

The Science of Addiction and the Brain
Scare tactics about the impact of addiction are common, but the...

Remembering Audrey Kishline, the Founder of Moderation Management
On December 19th, 2014, a 59-year-old woman almost nobody had ever heard of named Audrey Conn died...